I needed to get a dental crown and my dentist suggested I get a CEREC crown because I could do it in one appointment and a computer fits it accurately. I agreed, but nothing went the way she said. First, I was in the chair for over four hours. Then it didn’t fit at all. She ground the sides and top. The top is ground down so much that it is flat and doesn’t really look like a tooth at all. It looks more like a white box. She said the problem came because my tooth was in a bad condition and she had to take a “model” tooth from the database. Apparently, the only image of my tooth she took was when it was already prepared. It has been several weeks and it is still sensitive. Does any of this feel right to you? 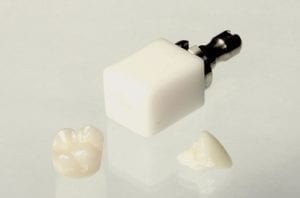 There is something not right here. First, this whole database business. A CEREC machine’s software is designed to deal with teeth that are in bad condition. That’s the whole reason they need a crown to begin with whether it is a CEREC crown or a traditional one. My guess is your dentist doesn’t yet know how to utilize the software. Here’s how it works. She would input into the software what tooth is being crowned. It in turn gives her a starting point for the tooth. That as well as upload images of the surrounding and opposing teeth, allow for a perfect fit. Clearly that is not how she approached it.

This will need to be fixed because the issues involved in a crown not being placed properly can be serious. To give you a sampling:

Getting this CEREC Crown Fixed

You’ll need to get a blind second opinion. This means you won’t tell the second dentist who the first dentist was or how the appointment went. Just tell them the crown is bothering you and ask what is wrong. You may have to get an x-ray for him to know what is the real culprit but it will be worth it to get this done right. If he pressures you to know who did the work, explain to him that you just want an unbiased opinion and will tell him after his diagnosis.

Then, if it is as bad as I think, you’ll be able to go back to the original dentist armed with the knowledge you need. Don’t ask for a refund, but rather ask her to pay for the repair, which could cost more than she originally charged you for this poorly done crown.

This blog is brought to you by Hilton Head Dentist Dr. Bonnie Rothwell.