My new job has dental insurance. I was thrilled because I’d been neglecting my dental care due to finances. I went today and they said I have need for two crowns and two fillings. Given how long it’s been since I’ve been it wasn’t a total shocker. The two crowns are an upper front tooth and a molar. The two fillings are also back teeth. The dentist suggested CEREC crowns, which my insurance doesn’t seem to cover. Are they better? Would it be worth the extra cost? Also, they said my back teeth are deeply pitted and I should get sealants. That’s also not covered. What do you think? 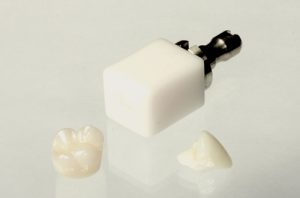 The big benefit to CEREC crowns is they can be milled and placed in one appointment, eliminating the need for a temporary crown and second appointment. In general, they’re equal in quality to traditional crowns. The one negative difference is they’re milled from a single block of porcelain. That makes them look uniform in color.

But if you look at your front teeth when you smile, you’ll notice they’re not uniform. While the entire tooth is translucent, Parts of it are more opaque than others. Because of that, while I recommend CEREC crowns for most restorations, I wouldn’t recommend it on a front tooth. Instead, I’d do a traditional porcelain crown which can be created using several blocks of porcelain giving it the subtle varieties needed to look completely natural.

As you’ll want to have a traditional crown from your front tooth, you may as well do both of them that way.

As for the sealants you mentioned, they’re usually covered on children. They seal the back teeth so that nothing can get down in those groves and pits you mentioned. It’s worth it to get them if you’re at great risk for decay.

I’m only mentioning this because you’re getting a crown on a front tooth. Many people dream of one day getting their teeth whitened. If you’re considering whitening be sure to do it before you get your crowns made. Once the crowns are finished, there’s no way to whiten them. However, they can be made whatever color you need. So, whiten the teeth, then get the crowns made to match.

Who Should Craft Your Porcelain Crown?

Again, given that you’re having a front tooth done, it’s especially important that it’s done well. You want it to look both natural and beautiful. Not every cosmetic dentist is equally skilled. Look at the two pictures directly above. Both images are of the same smile. Both smiles have crowns. Looking at the image on the left, you’ll see that the crowns are okay. While they look natural, they don’t look beautiful and the patient has a black triangle between two front teeth. She came to Dr. Rothwell to fix her smile. The smile on the right is the one Dr. Rothwell did. You can see the teeth are both natural and beautiful, plus there’s no longer a black triangle.

If you want a beautiful crown, you’ll need a highly skilled cosmetic dentist to do that. Ideally, you’ll want an AACD accredited dentist. However, not every state has a dentist who’s reached accreditation level. If you can’t find one at a reasonably close distance where you are, try the mynewsmile.com website.

They only recommend skilled cosmetic dentists. Anyone on their list is qualified and artistic enough to craft a stunning crown for you.

This blog is brought to you by Dr. Bonnie Rothwell.