I had an infected tooth. I had a root canal treatment and my dentist suggested a CEREC crown because they are faster. However, ever since I had the crown placed there is pretty serious pain when I bite down on food. I’ve been back twice for him to reduce the crown. It hasn’t helped. Now he’s telling me that it is because of the way I chew that is causing the problem. I am finding that hard to believe. My chewing didn’t hurt before I got this crown. Have you heard of this being a problem with CEREC crowns? 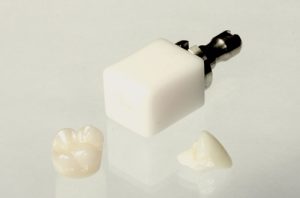 No, the problem isn’t the way you chew. Like you mentioned, you had never had this problem before. If it was a bite problem, you would have noticed it before this. I don’t think it is the CEREC crown itself either. Generally, because CEREC crowns are milled by a computer they fit better than other crowns.

When a dental crown hurts when you bite down it is almost always from one of two reasons. The first is that the crown is seated too high. When that happens, your crown receives the full force of your bite without other teeth to spread the bite across their surface. The result is painful.

The second possibility is there is still an infection lurking. It is not uncommon for a root canal treatment to fail. An x-ray should be able to clear that up. However, if your dentist doesn’t have good diagnostic skills it can be missed on the x-ray. You may want to see a root canal specialist and have them look at it. It sounds like your dentist is in a bit over his head so he’s trying to throw excuses at you.